Welcome to the Portsmouth Green Party

Get news and events from the local Portsmouth Green Party, watch videos on Green issues relevant to the local area and find out how to get involved!

You can support us by donating, volunteering, voting, switching energy providers or recycling through our partner schemes. We are spearheading the #LetPompeyBreathe air quality campaign. 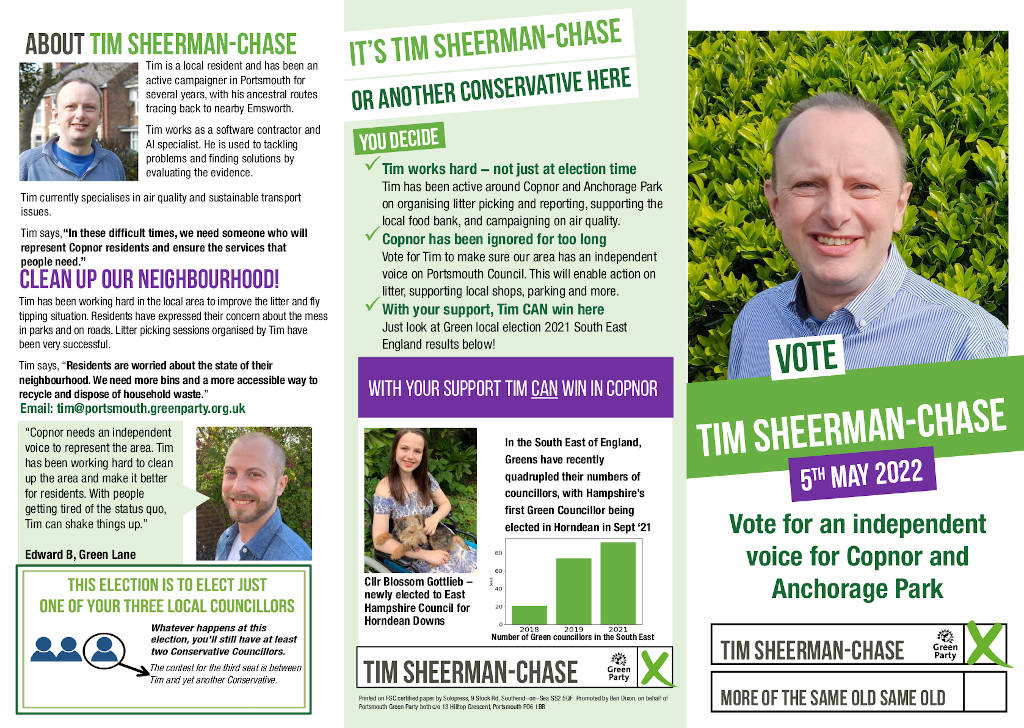 The views and opinions expressed in this blog are those of the authors and do not necessarily reflect the official policy or position of any other party, agency, organization, employer or company. 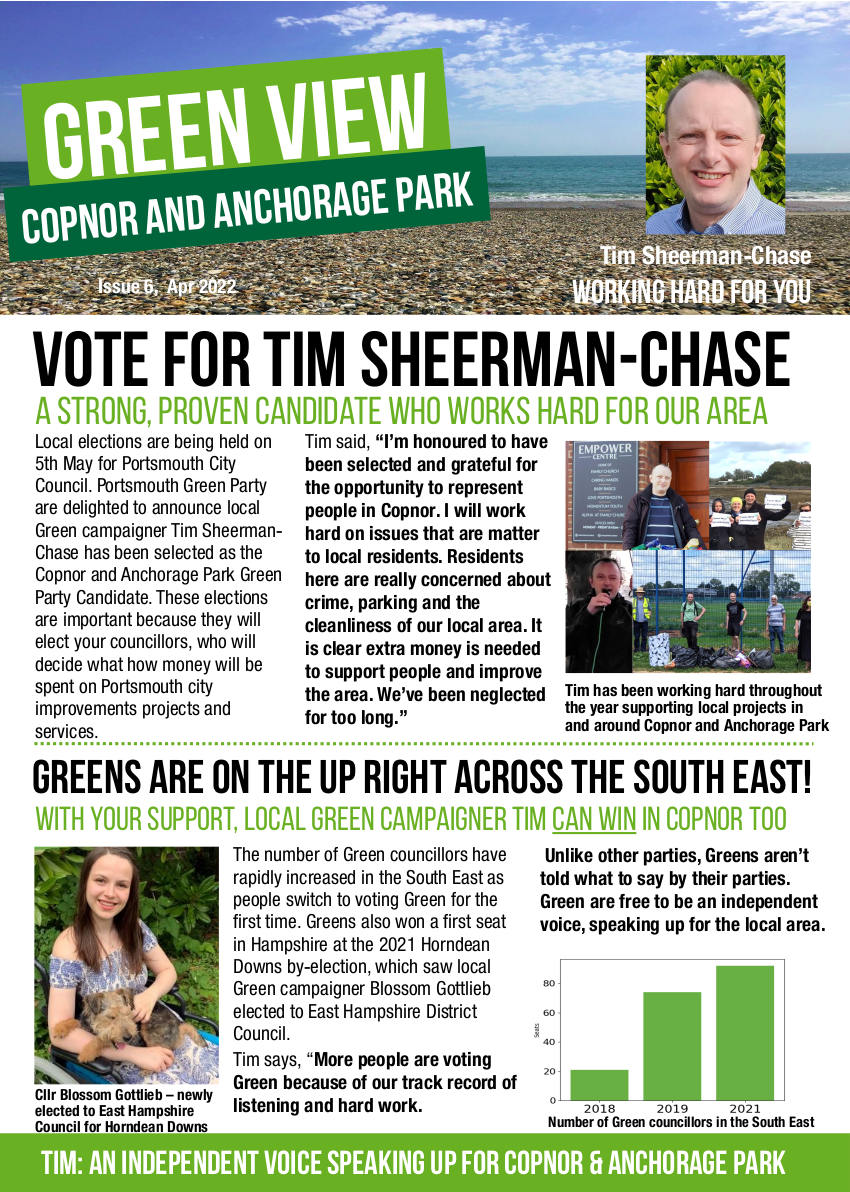 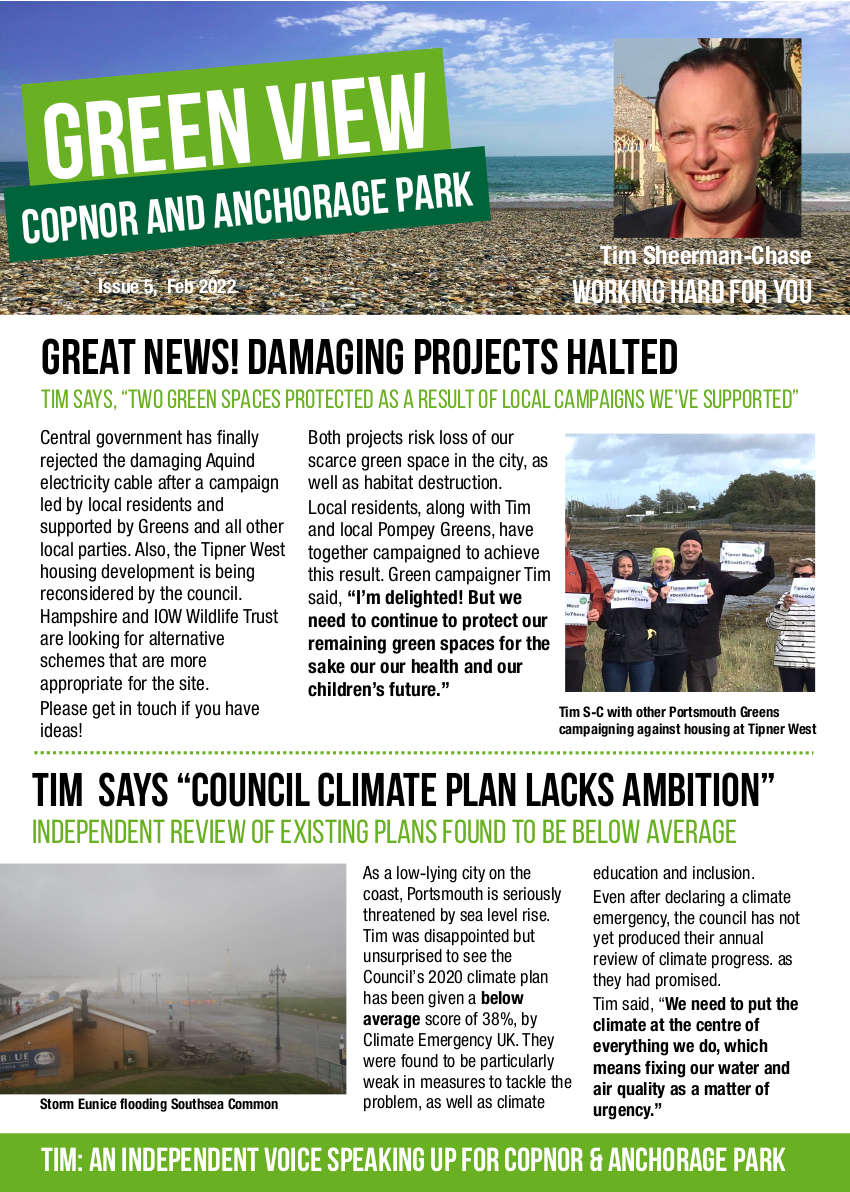 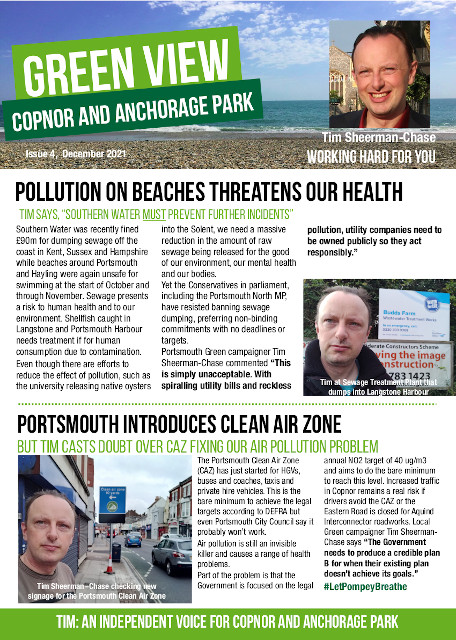 What is Transgender Day of Remembrance?

On November 20, the trans community and their allies will commemorate the lives of all trans people who were have been murdered or died from suicide in the past 12 months to expose the deadliness of transphobia both in law and the wider society.

On Transgender Day of Remembrance (TDOR), trans people, activists, and loved ones may choose to hold a candlelight vigil, publicly read out the names of those we’ve lost, or march on government offices to demand better protections for trans people. 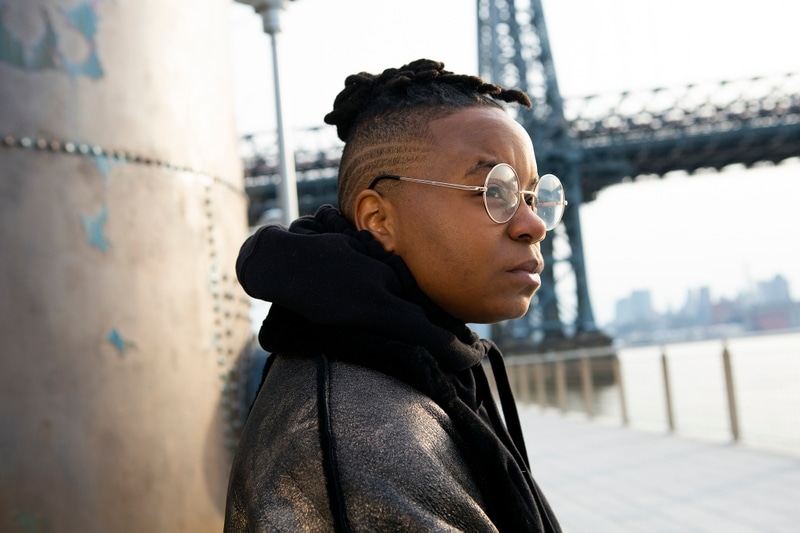 Following the 1998 transphobic murder of trans woman Rita Hester, 250 people attended a candlelight vigil and the local community fought to have her life covered respectfully by the press.

Trans woman Gwendolyn Ann Smith saw this and was moved to create the “Remembering Our Dead” web project to remember trans people who died of transphobic violence from 1970. The following year, she founded TDOR, which has since become an international day of action, marked in 20+ countries.

TDOR led to the founding of Transgender Awareness Week, which in the week leading up to November 20 and focuses on educating the public about trans issues

2021: The deadliest year for trans people 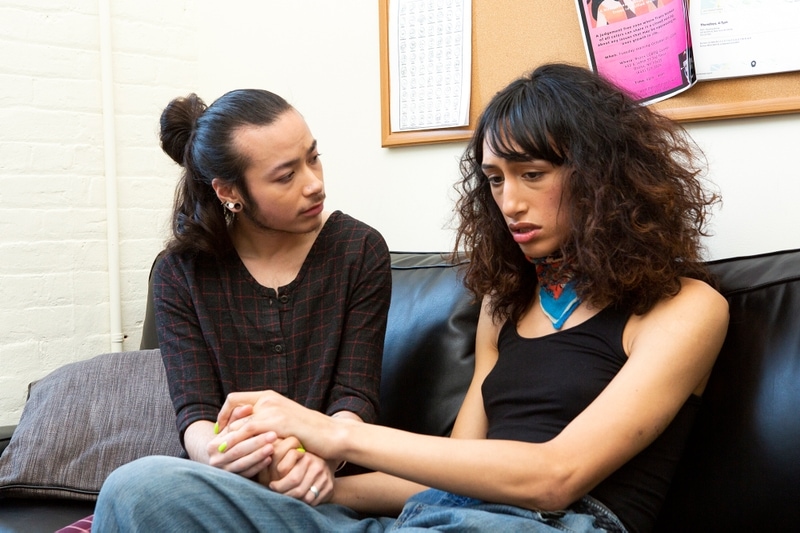 This past year has been named “the deadliest year for trans people on record”, as 375 trans people around the world have been murdered by transphobes; a quarter of them killed in their own homes. The youngest was just 15 years old.

Worse still, these figures only scratch the surface. This is because:

Violence against trans people is a problem for everyone because no one is free until all of us are. It is also a reflection of who holds power in society, so it is up to all of us to hold politicians, the media, and other powerful groups to account, even those whose political opinions line up with ours on every other point. To piss off a noted transphobe, I will paraphrase Albus Dumbledore. It’s hard to stand up to those on the other side of the political aisle, but it's harder (and more important) to fight transphobia from people you consider your political peers.

How you can help combat transphobic violence 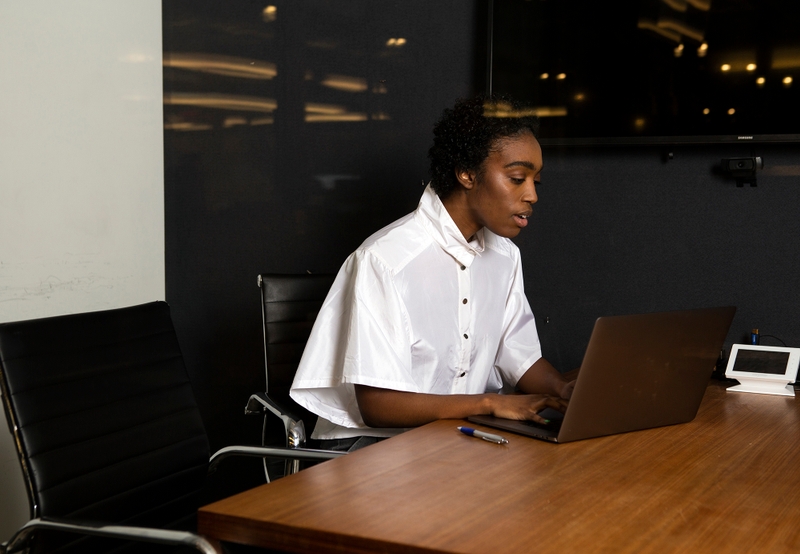 This section, and tbh this entire article, is written for cis allies who want to help but aren’t sure where to start.

Educate yourself about trans issues, especially in your area, to learn what needs doing and what your role can be. An easy way to do this is to look at advocacy groups, like Chrysalis, Mermaids, and Stonewall. Read their websites, sign up for their newsletters, go to events (only where allies are invited) and listen.

Start with small actions, like putting your pronouns in your bio/email signature, attending rallies, signing petitions, and writing letters to local politicians, and always look to the charity for guidance on what they need you to do.

Finally, I’d like to commemorate the trans people who have been killed by transphobic violence in 2021. Rest in Power.

This was written by Emma Murphy, the Equality and Diversity Officer for Portsmouth Green Party.

With the exception of the header image, which is on Pexels, the photos used are from The Gender Spectrum Collection by Broadly under their Creative Commons guidelines. 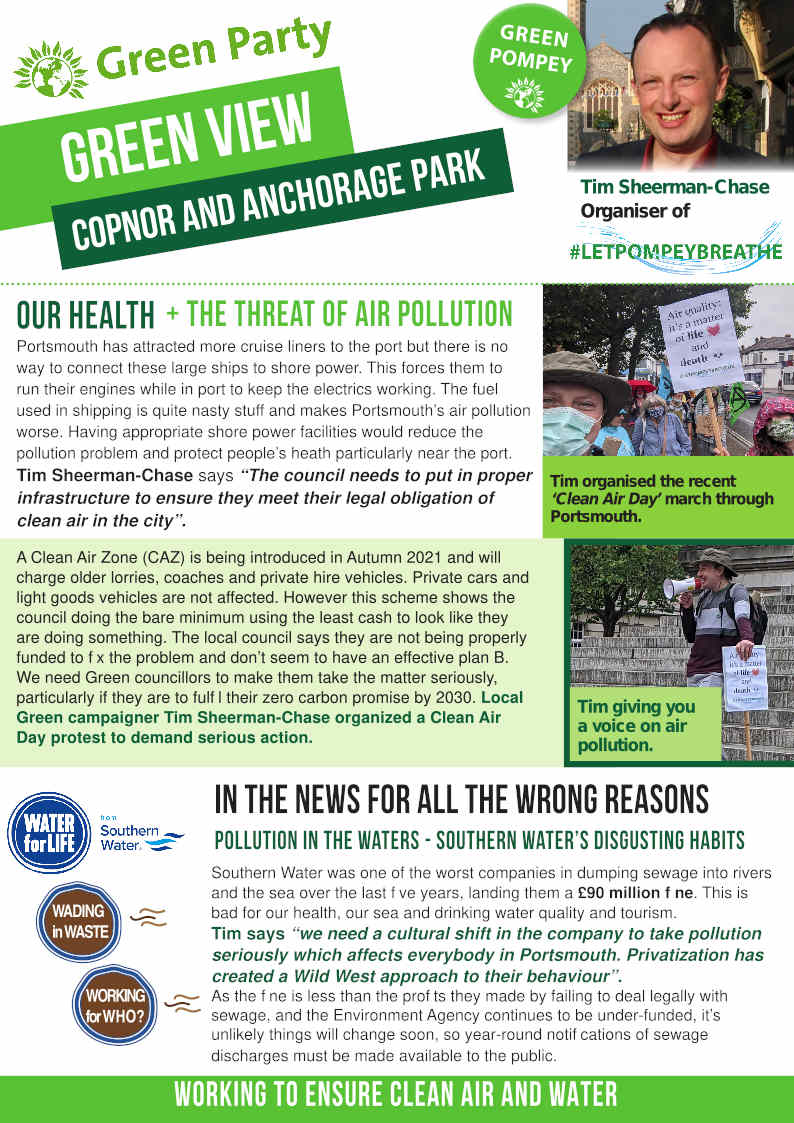 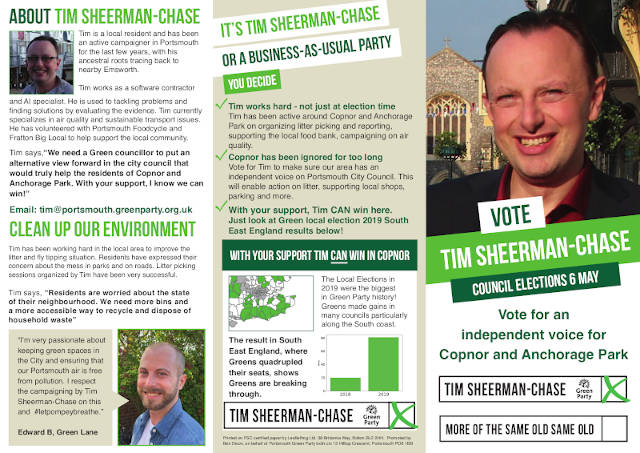 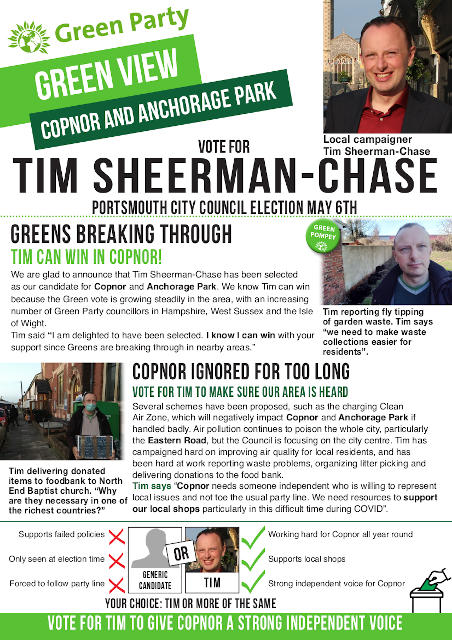 LGBTQ+ History Month. What it is and why it matters

Today [1st Feb] is the first day of LGBTQ+ History Month. It’s a time to reflect on the contributions that queer people made to our society. It is a time to remember the LGBTQ+ people who were either written out of history altogether or had their sexuality and/or gender identity erased when their deeds were written down.

The problem is that history is not just written by the victors, but also by those who hold power. Historically, in terms of Britain, this has been heterosexual, cisgender, able-bodied, white men. This means that they can celebrate cracking the Nazi code and then just sweep Alan Turing’s sexuality under the rug. 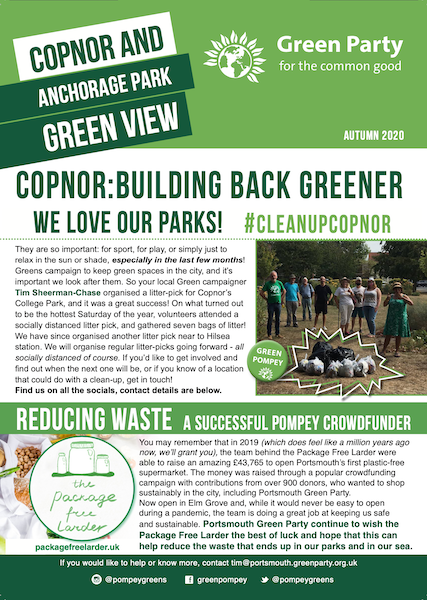 This is a response from Portsmouth Green Party representative, Tamara Groen, on the racist social media posts by Councillor Linda Symes, the Conservative councillor for Eastney and Craneswater, as reported in The News, Portsmouth on June 3rd 2020.

Though Cllr Symes has been suspended from the national Conservative Party; to date, the councillor has not apologized for her actions, while the local Portsmouth Conservative party and their Leader Cllr Donna Jones have remained silent. After waiting a week for a local acknowledgement, Tamara writes directly to Cllr Symes. 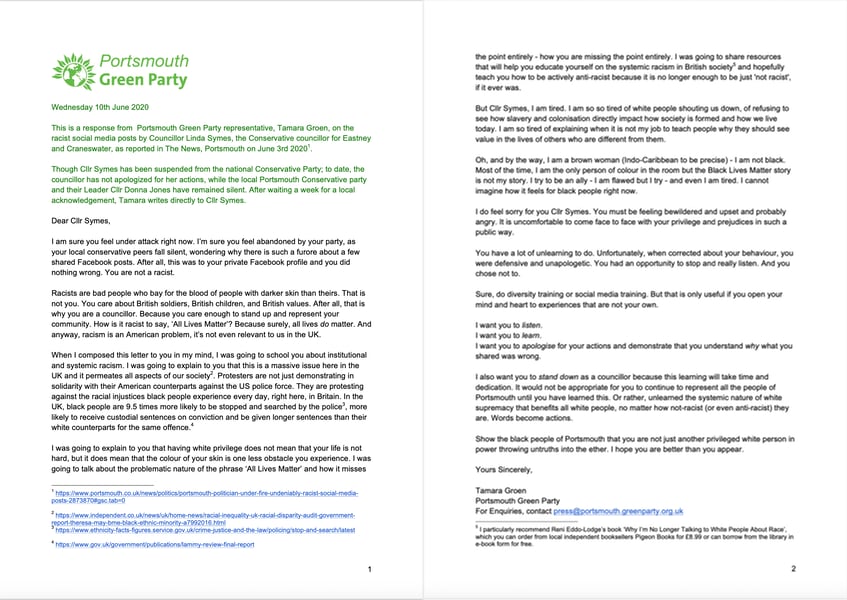 Green candidate for Portsmouth North is Lloyd Day. Lloyd grew up in Cosham and for the last six years has lived in Hilsea. He is a Specialist Paramedic, based in North Harbour but working all over the local area. The Green candidate for Havant is John Colman.

In Portsmouth South, The Green Party will be standing aside as part of 'Unite to Remain'. 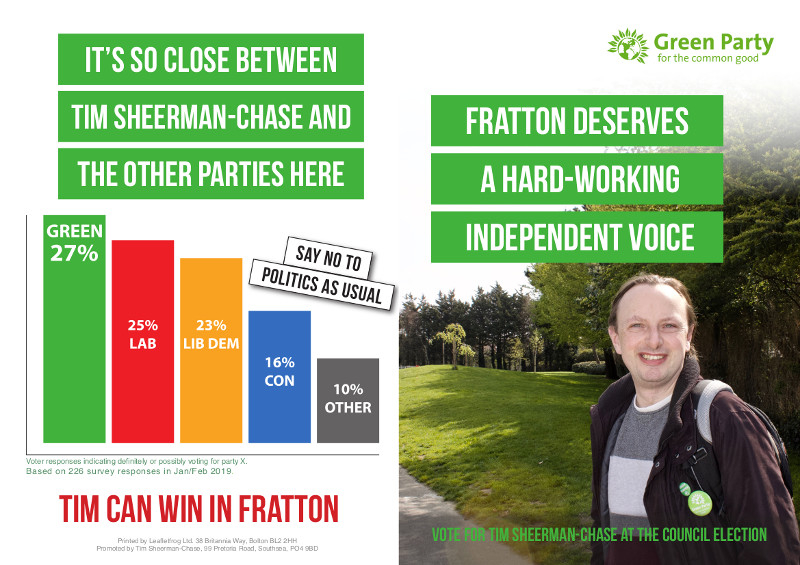 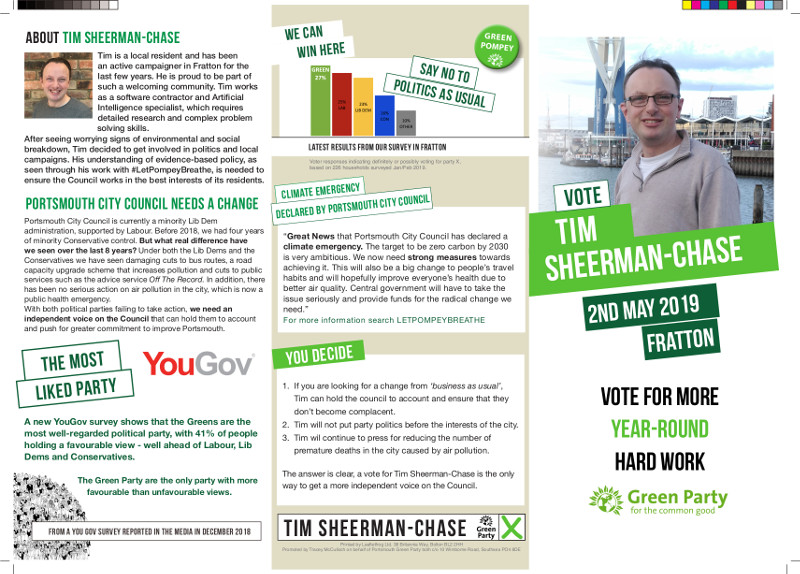 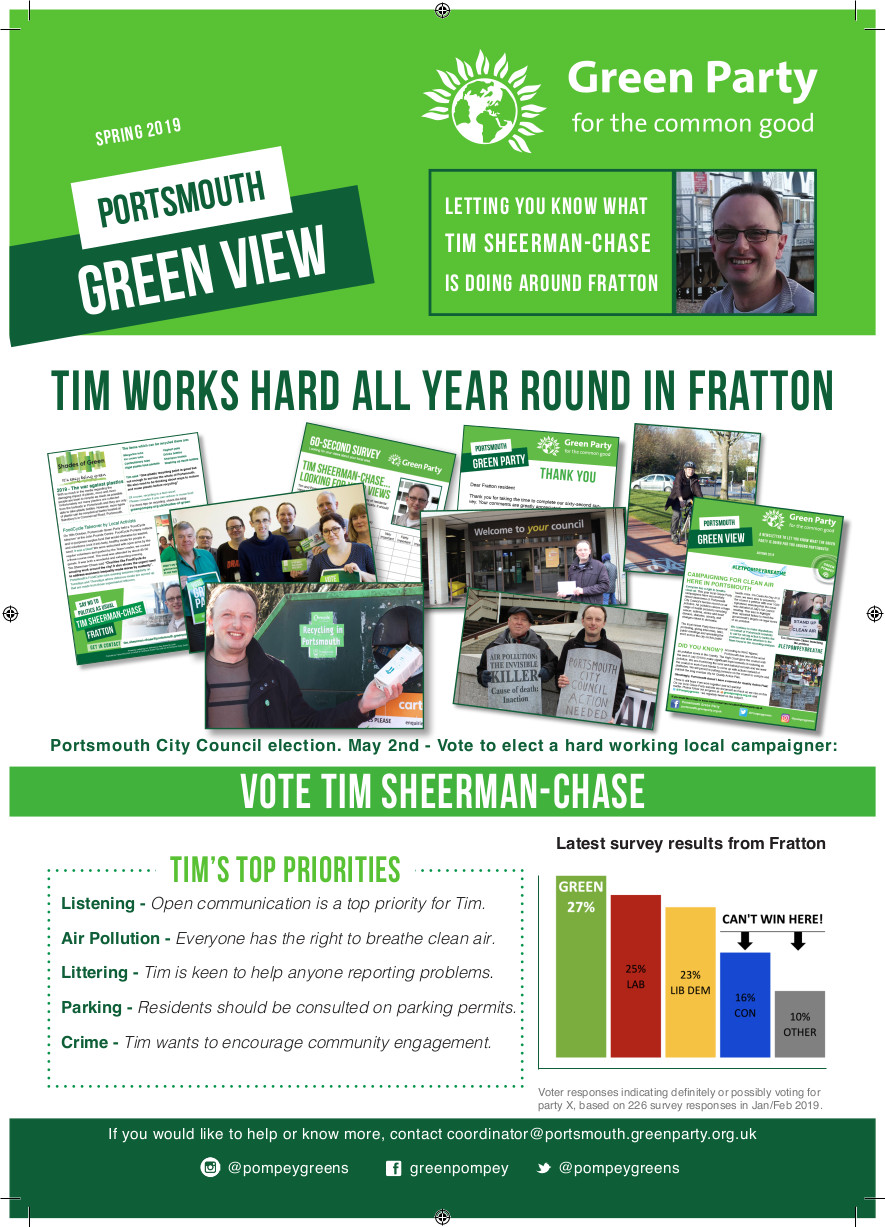 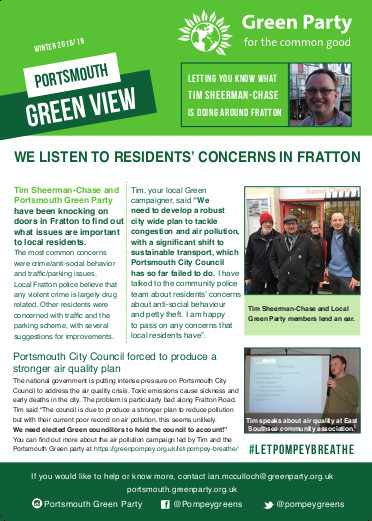 We have started distributing our latest newsletter detailing our activity in the local area. 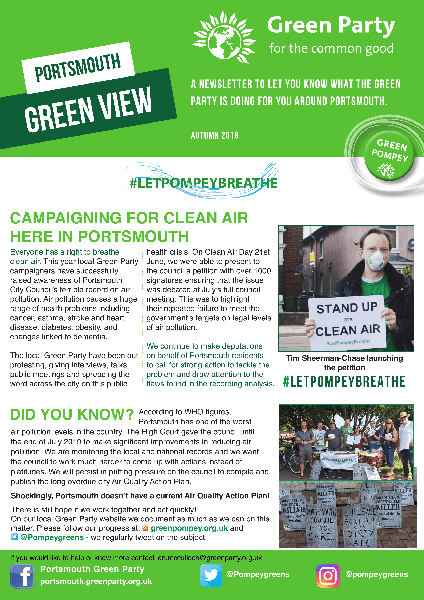 Greens are getting together to highlight the importance of reducing transport-related air pollution - not only for our health, but also for our environment and for the fight against climate breakdown.

Let's take back our streets for people, not cars, and establish the right to breathe clean airhttps://action.greenparty.org.uk/we-need-clean-air-now #BreathingCities 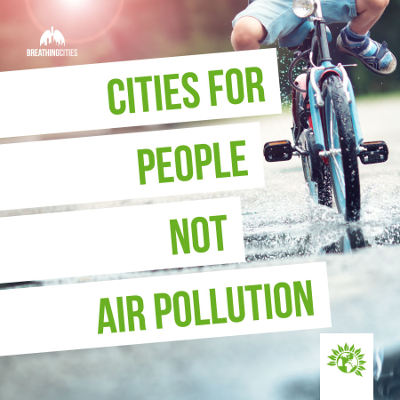 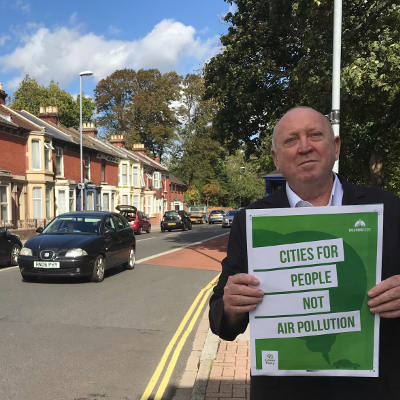 #LetPompeyBreathe had another successful action day on the 4th April with a gathering in Guildhall Square, and a public meeting at the Southsea Village Pub later in same the day. Portsmouth Green Party joined with Portsmouth Friends of the Earth and Keith Taylor MEP to call for Portsmouth City Council to tackle the illegal pollution levels in the city. The heath burden was symbolised by a cluster of head stones pointing out the approximately 100 early deaths linked to air pollution per year in the city, and the cause of death: "inaction". Leaflets were distributed by volenteers to the public, who in many cases were completely unaware of the danger they routinely exposed to by NO2 and particulate pollution.

The evening meeting was well attended with a panel comprising: Rachel Hudson, Portsmouth Friends of the Earth, Rob Bailey, Milton Neighbourhood Forum, and Keith Taylor MEP. Several people spoke out about their local concerns, including schools being next to busy polluted roads. Measures to tackle pollution were discussed, including improving bus services, a Healthy Streets policy for urban planning, improved monitoring around the city, ensuring new developments are sustainable including in terms of traffic pollution, and pushing for a car free day in the city centre. Keith launched his Polluted Cities Hampshire report, which outlines the situation in Portsmouth, Reading and Winchester.

“There is an overwhelming demand from residents for action on air pollution in Portsmouth. The graveyard protest is a macabre but vital reminder that green campaigners won’t let the Council sit idly by while the people of Pompey choke.”

Rachel Hudson, from Portsmouth Friends of the Earth, added:

“It shouldn’t be an aspiration to have clean, fresh air for everyone, everywhere in our city – it is our right. We’ve been monitoring air pollution levels using our own diffusion tubes and we want to ensure community input is listened to by those who can make a difference. With people’s health being at risk, adequate public transport, walking and cycling infrastructure are urgently needed.”

#LetPompeyBreathe is also launching a petition to call for action by Portsmouth City Council to address pollution. 1000 signatures will have the petition debated by the full council. (Watch this space for when it is ready and live!) This campaign forms part of the Green Party's national Breathing Cities campaign. 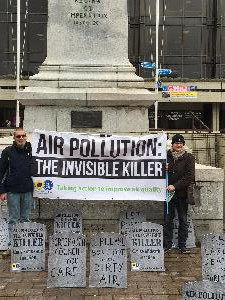 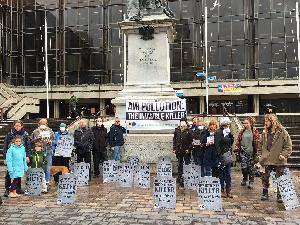 Portsmouth Green Party For a Healthy and Fair Society

The government is proposing to cut £8,052,952 from Portsmouth schools, which is equivalent to 216 teachers, according to the National Union of Teachers. That means fewer teachers, bigger class sizes, less support staff, fewer resources and some subjects scrapped. If you are a parent of a child in a school in Portsmouth, you can ask your headteacher about the budget cuts that the school is facing and what measures the school plans to take to cut their costs, or search for specific school on schoolcuts.org.uk.